Iran: The 4th Salt Man found in Zanjan is a Young Adult

Tehran, May 3 (CHN) –The fourth salt man found at a ancient salt mine in Chehr-abad, Zanjan last year, has been identified as a young adult 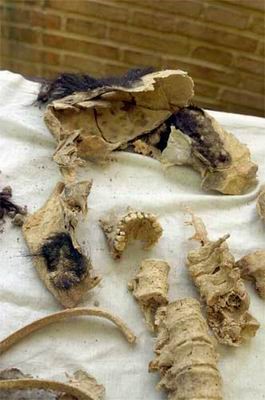 According to the latest researches, the man’s face lacks any beard and his height is 165-70 cm. This last found salt man is the most intact of all four found so far.“During the clearance and fixation of the 4th salt man, experts found an iron stagger in the scabbard attached to his waist. Also, two ceramic jugs have been found with a kind of oil inside which, scholars believe, could have been used for lantern” said Abolfazl Ali, head of Chehr-abad research group.He also mentioned that the salt man’s cloths include a long quilt reaching his knees and a thigh high gaiter.“The salt man has two ear rings but their material has not been distinguished yet” Ali added.The first salt man also had golden ear rings and a sharp instrument attached to his waist that, scientists believe, could have been used for cleaning purposes.The first salt man now kept in the Iranian National Museum was discovered eleven years ago.Second, third and fourth salt men found during archaeological excavation in Chehr-abad salt mine last year.Experts estimated the first find, aged 35-40 and measuring 165-170 in height, dated back to the Sassanid era, some 1700 years ago.